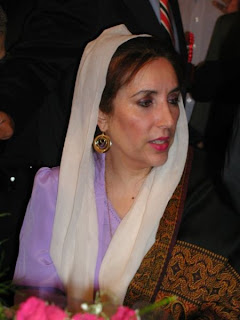 * inthenews.co.uk...
Benazir Bhutto's Pakistan People's party (PPP) has chosen her teenage son Bilawal to succeed her as their leader... The 19-year-old said the PPP would follow his mother's wishes and participate in elections currently scheduled to take place on January 8th... He is currently studying at Oxford University and is expected to remain only a ceremonial leader while he completes his degree...
Son to succeed Bhutto
.
* Reuters.com...
Benazir Bhutto's party appointed her son and her husband to succeed the slain Pakistani opposition leader on Sunday and the party said it would take part in a Jan 8 election as Bhutto would have wanted.
CHRONOLOGY-Bhutto's heirs appointed
.
* SKY NEWS...
University student Bilawal Zardari, the teenage son of Benazir Bhutto, has been catapulted into international politics by his mother's death... Aged just 19, he has accepted joint leadership of Bhutto's Pakistan Peoples Party with his father, Asif Zardari...
Who Is Bhutto's Son Bilawal Zardari?
.
* The Australian... (December 31st posting)
The party backing Pakistan President Pervez Musharraf last night suspended campaigning ahead of parliamentary elections due in nine days, and called for the poll to be delayed for up to four months... Tariq Azim, information secretary of the Pakistan Muslim League (Q), said the elections would lose credibility if they were held on January 8, with the party of slain opposition leader Benazir Bhutto in mourning and other parties threatening a boycott...
Musharraf party halts campaign
.
* ChinaView.cn...
NOTE: Lots of up-to-date info, photos, videos and more at the following link...
Pakistani Situation
******************************
* Only Son Vows To Continue With Bhutto's Fight *
About video: The only son of assassinated Pakistani politician Benazir Bhutto has vowed to continue her struggle. Bilawal Zardari and his father will co-chair Ms Bhutto's party and said they will fight elections whenever they are held.
Info/Video posted on LiveLeak by barnesy
Posted by AubreyJ......... at 12/30/2007 08:20:00 PM