Sis and I one Christmas Eve Night 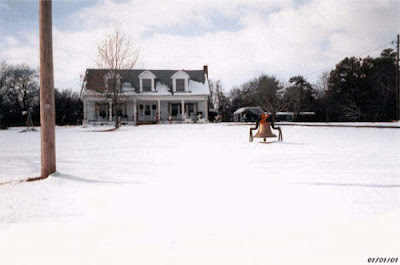 As the night passed on by and everyone was in bed
Sis and I waited for that little man in red
Sis talked to me quietly and I did the same
What was Santa Claus bringing us... A doll, a train

Then all of a sudden a noise we could hear
Could it be Santa and all his reindeer
On our Walkie-Talkies the warning went out
I heard it on the roof, in the living room, no doubt

Early that Christmas morning Happy's barking and growling we could hear
Big brother and dad were hollering… No Happy, that's Santa in here
Little bells were ringing as Santa dragged Happy through the house
Happy had Santa by the pants leg and was thrashing and growling about

Into the living room sis and I ran so fast
Could it be we would finally see Santa Claus at last?
As we entered the room our eyes got big and wide
There was candy from the Christmas tree to the door going outside
And in the front doorway a red pants leg did lay
Big brother had caught Happy and said Santa got out of here OK

With all of this said, from outside we could hear
Bells just a ringing with holiday cheer
Big sister said she heard Santa… It was all so clear
He shouted, "Jay… Lock that dog up before I get back here next year!"