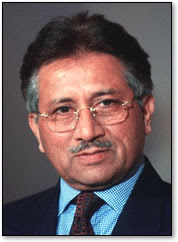 state of emergency and restored the constitution Saturday, easing a crackdown that has enraged opponents and worried Western supporters... Information Minister Nisar Memon said Musharraf had signed the order lifting the emergency. He called it a "historic day"...
Read this report in full at FOX.news.com
.
.
Musharraf Biography Portrait
from PresidentOfPakistan.gov website
Posted by AubreyJ......... at 12/15/2007 10:00:00 AM