Stephen Hadley briefed White House reporters today on the report, which was produced by the office of the director of national intelligence. [Read Transcript HERE - Has video too]

The estimate is the intelligence community's judgment given the available information. All 16 U.S. intelligence agencies including eight within the Defense Department participated in the effort.

While the Iranian government continues closure of its covert nuclear weapons program, the country re-started its uranium enrichment program in 2005. The material made from this could be used to fuel bombs.

The estimate strengthens the Bush Administration's contention that Iran can be persuaded to stop its program via diplomacy. "And it suggests we have the right strategy: intensified international pressure, along with a willingness to negotiate a solution that serves Iranian interests while ensuring the world that it will never have to face a nuclear-armed Iran," he said.

The bottom line for the strategy is the international community must turn up the pressure on Iran with "diplomatic isolation, United Nations sanctions and with other financial pressures, and Iran has to decide that it wants to negotiate a solution," Hadley said.

The estimate has high confidence in the judgment that Iran's halt and other nuclear related decisions was directed primarily in response to increased international scrutiny and pressure resulting from exposure of Iran's previously undeclared nuclear work involving uranium enrichment, Hadley said.

The estimate admits that analysts "do not know whether Iran currently intends to develop weapons, but they assess with moderate to high confidence that Tehran at a minimum is keeping open the option to develop nuclear weapons," Hadley said.

While pressure, sanctions and other international efforts seem to move Iran along, the estimate says that convincing Iranian leaders to forgo the eventual development of nuclear weapons "will be difficult," the national security advisor said.

The United States has been asking nations around the world to continue to put pressure on Iran to end its nuclear weapons program since Iran resumed its nuclear enrichment effort, Hadley said.

"If we are to avoid the grim choice between accepting an Iran on the path to nuclear weapons or considering the use of force, we need to intensify our pressure on Iran while making clear that if they do suspend enrichment, there is an opportunity for better relations with the international community," Hadley said.
From news article by DoD’s American Forces Press Service - Written by Jim Garamone
.
Read the NIE Report below:
National Intelligence Estimate (NIE)
November, 2007
Iran: Nuclear Intentions and Capabilities
Photo Credit: The White House
*******************
Update: Tuesday, December 04, 2007
* Politico.com brings us this post and it starts off like this... President Bush refused to rule out a military strike against Iran Tuesday, though he confirmed the latest National Intelligence Estimate showed the Islamic state had halted a weapons program..."Iran was dangerous, Iran is dangerous, and Iran will be dangerous if they have the knowledge to make a nuclear weapon," he said at the White House...
Read post in full at link below...
Bush refuses to rule out Iran strike 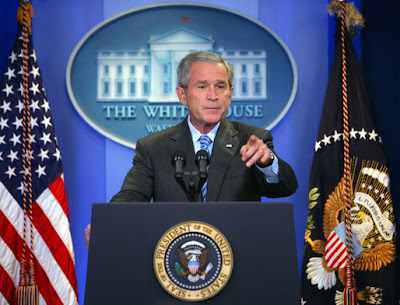 . . .
.
.
****************
Let’s see what our friends in Israel
have to say over this NIE Report...
.
* YNETNews.com has this take...
"The bottom line is that words don't stop missiles, actions do," Defense Minister Ehud Barak said on Tuesday evening in response to the US claim that international pressure drove Iran to permanently freeze its nuclear program in 2003... "And there is much that needs to be done regarding the Iranian nuclear program. We need to take action in applying sanctions, in exercising diplomacy and in other venues as well."... Israeli intelligence disputes the report's conclusion, Barak said, and still believes Tehran is still trying to develop a nuclear weapon: ''It's apparently true that in 2003 Iran stopped pursuing its military nuclear program for a time. But in our opinion, since then it has apparently continued that program."...
Read this report in full at link below...
Barak: Iran still pursuing nuclear bomb
.
* IsraelNationalNews.com has this report...
Israel's Defense Minister Ehud Barak says Israel's assessment is that Iran did stop work on its nuclear bomb in 2003, just as the United States announced - but that it resumed its efforts sometime afterwards... Barak, a former Israeli Prime Minister, says the U.S. intelligence assessment that Iran has stopped work on its nuclear program is not shared by Israel. "Iran did stop its nuclear program for a time in 2003," Barak told Army Radio on Tuesday morning, "but in our assessment, it resumed its work at a certain point." He would not state when that occurred...
DM Barak Nixes US Assessment, Says Iran is Working on Bomb
****************
.
GOOD NEWS with a touch of concern comes with this NIE report.
Only time will tell how it all pans out...
AubreyJ.........
Posted by AubreyJ......... at 12/04/2007 09:34:00 PM