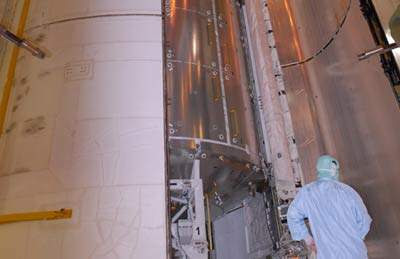 About Photo: A technician monitors the closure of the payload bay doors on space shuttle Atlantis during launch preparations at NASA's Kennedy Space Center. The European-built Columbus laboratory is bolted inside the cargo bay and will be attached to the International Space Station during mission STS-122.
Photo credit: NASA/George Shelton
************************
* Space.com has this great read at link below...
Astronaut Trio Primed for Space Station Construction
.
* NASA.gov has this report and it goes like this...
The launch team at NASA's Kennedy Space Center is continuing its steady march toward a lift off Thursday afternoon for space shuttle Atlantis. The countdown is proceeding smoothly, NASA Test Director Jeff Spaulding said Wednesday.
.
Mission STS-122 is scheduled to launch at 4:31 p.m. EST from NASA's Florida launch base. Atlantis will carry the European-developed Columbus laboratory and attach it to the International Space Station. Seven astronauts, including two from the European Space Agency, will fly aboard Atlantis.
.
Technicians and engineers at the launch pad have several steps ahead of them Wednesday. The most visible milestone will come in the evening when the Rotating Service Structure is moved to its launch position where it will be out of the way of Atlantis. The gantry encloses much of the shuttle while it is on the launch pad and gives workers access to critical areas of the shuttle and its payload.
.
The weather forecast calls for a 90 percent chance of acceptable conditions at launch time. "The vehicle's looking good and the weather's looking good, too," Weather Officer Kathy Winters said.
...
* Read the latest updates on Launch HERE *
***********************
I’ll be posting on the Space Shuttle Atlantis Launch
and its Mission over the next so many days...
So check back!!!
AubreyJ.........
Posted by AubreyJ......... at 12/05/2007 09:08:00 PM