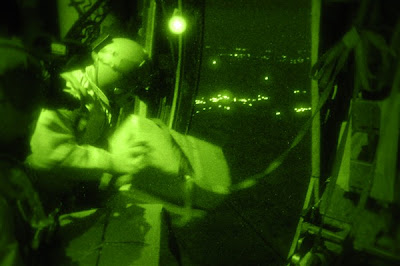 The leaflets are the "wanted posters" of the region and were requested by a Polish psychological operations unit in Multinational Division Center-South.

They ask local citizens not to harbor the three high-visibility targets, who are wanted for using improvised explosive devices and sniper attacks on U.S. and coalition forces.

"Within hours of the drop, reports were received of individuals arriving at Iraqi police stations with leaflets in hand," said Air Force Lt. Col. Elizabeth Kavanagh, an information operations planner at the Combined Air and Space Operations Center in Southwest Asia. "Iraqi citizens are calling the tip lines with information about planted IEDs and suspected local militia members. Through this feedback, we know that these leaflets worked, and we hope that efforts by the local populace will continue in the months to come."

"It feels really good to be helping (the multinational division) out," said Air Force Tech. Sgt. Alex Garrett, deployed to the 40th Expeditionary Airlift Squadron. "If they capture any one of these guys because we threw the leaflets out, it's a huge deal. It's like our little piece of the pie. We played a part in bringing these three bad guys down."

The leaflets show images of men U.S. and coalition forces are looking to capture along with instructions for citizens to report information they may have to assist in the capture or arrest of those individuals.

Garrett said a prior leaflet drop mission he participated in over Afghanistan advised civilians to clear the area because of an impending operation to take down insurgents. One of the reports received back was that the civilians took heed of the leaflets and left the area. Coalition forces were able to clear the area and capture or kill the insurgents with minimal risk of civilian casualties.

"It's pretty cool that we get to help out the civilian population. We are only here to get the bad guys, not the good guys," he said.

The U.S. Air Force and U.S. Army work closely together to print and disseminate leaflet drops in Iraq, Afghanistan, and other countries in the region as a way to make mass contact with locals that are in rural and less established areas. The leaflets are used for both informational purposes to educate citizens on events and operations going on and to gather information on insurgents and militia in an area.

"The simplest things, such as a picture and basic information, get the meaning across very quickly and increase the probability of contacting a large portion of the populace in the targeted area at one time" Kavanagh said.
Written by Staff Sgt. Angelique Perez, USAF - Special to American Forces Press Service
(Perez is assigned to U.S. Central Command Air Forces Public Affairs.)
Posted by AubreyJ......... at 12/03/2007 07:00:00 AM