General Petraeus Picked As Next Commander of U.S. Central Command

It’s being reported this morning that Four-Star General David Petraeus has been given the nod for being the next Commander of U.S. Central Command, (if confirmed by the Senate of course), replacing Navy Admiral W. Fallon who bailed on the job this past March... 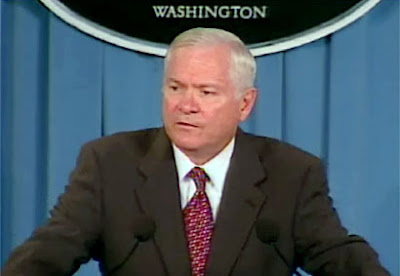 If confirmed by the Senate, Petraeus will succeed Navy Adm. William J. Fallon, who retired and turned over the command’s reins temporarily March 28 to his deputy commander, Army Lt. Gen. Martin E. Dempsey, who is serving as acting commander until a successor to Fallon is confirmed.

Gates also announced that Army Gen. Raymond Odierno has been nominated for the command in Baghdad. He had been nominated as Army vice chief of staff.

Army Lt. Gen. Peter Chiarelli has been nominated for a fourth star and the position of Army vice chief of staff.

Bloomberg.com website has done a good job on reporting this story today and their reporting goes in part like this... “General Odierno and General Petraeus and Admiral Fallon were all in exactly the same position when it came to their views of Iranian interference inside Iraq,” Gates said. “And it is a hard position, because what the Iranians are doing is killing American servicemen and women inside Iraq.”... The U.S. has repeatedly accused Iran of providing weapons and training to Iraqi Shiite militias that have attacked U.S. forces. The Iranians deny the charge... During congressional testimony earlier this month, Petraeus said he was planning a Baghdad news conference to unveil evidence of Iranian involvement with the Shiite militias, including examples of arms supplied to them...
Read this news article in full at link below...
Petraeus Named to Head U.S. Forces in Middle East
**************************************