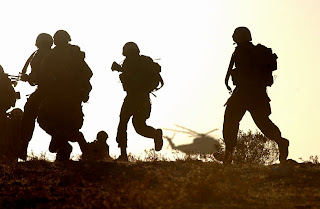 starts off like this... There is a heightened sense in the security establishment that a broad-scale ground incursion inside the Gaza Strip is necessary this summer to deal a severe blow to Hamas's infrastructure, sources in Jerusalem said Wednesday, following the death of three soldiers in a Gaza ambush... According to the sources, the incursion - similar but more difficult than Operation Defensive Shield in the West Bank in 2002 - would not take place until about a month or a month-and-a-half after US President George W. Bush's planned visit here in mid-May. By then, the last of the world's leaders to have come here to celebrate the country's 60th anniversary would have left. The timing would also place the operation in the middle of summer, considered an optimal time for this type of operation...
Read the rest HERE
IDF File Photo
Posted by AubreyJ......... at 4/16/2008 02:02:00 PM

Email ThisBlogThis!Share to TwitterShare to FacebookShare to Pinterest
Labels: Israel, On Ground Updates