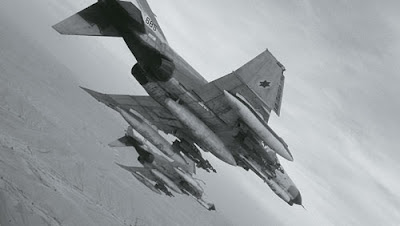 IAF file photo
.
Post Date: Sunday, May 20, 2012
.
“I think they have made a decision to attack,” says one senior Israeli figure with close ties to the leadership. “It is going to happen. …“I think they've gone into lockdown mode now,” the senior Western diplomat said. “Whatever happens next, whatever they decide, we will not find out until it happens.”
* YNetNews.com brings us the report…
Iran attackdecision nears, Israeli elite locks down
…
* USAToday.com had the following report posted on their website a few days back and it starts off like this… The U.S. has plans in place to attack Iran if necessary to prevent it from developing nuclear weapons, Washington’s envoy to Israel said, days ahead of a crucial round of nuclear talks with Tehran… Dan Shapiro’s message resonated Thursday far beyond the closed forum in which it was made: Iran should not test Washington’s resolve to act on its promise to strike if diplomacy and sanctions fail to pressure Tehran to abandon its disputed nuclear program…
Read the full report at link below…
U.S.envoy to Israel: U.S. ready to strike Iran if necessary
. …
* JPost.com has this report and it starts off like this…
Israel and the international community see no Iranian intention to give up its nuclear program, Foreign Minister Avigdor Liberman said Sunday following a meeting with US Secretary of Homeland Security Janet Napolitano… "There are no illusions on Iran's intentions on its nuclear program," he said. "We see no Iranian intention to give up its nuclear ambitions."… "I think the international community has no illusions on Iran's willingness to give up its nuclear program," he added…
Read the full report at link below…
FM: We have no illusions on Iran's nukes


………………………………
.
(Communicated by the Prime Minister's Media Adviser)
Photo credit: GPO
.
The following is an excerpt from Prime Minister Benjamin Netanyahu's remarks Monday evening, May 21, 2012, at a Civil Service Commission event:
.
“In recent weeks, I have heard those who have cast doubt on Iran’s intentions. They said that when Iran's leaders declare that they will wipe Israel off the map, they really mean something else in Persian. It would be interesting to hear what they think of the Iranian Chief-of-Staff's remarks yesterday: ‘Iran is committed to the complete destruction of Israel.’ This is clear and simple. Iran's goals are clear. It wants to annihilate Israel and is developing nuclear weapons to realize this goal.
.
Iran threatens Israel, peace and the entire world. Against this malicious intention, the world’s leading countries must show determination, not weakness. They do not need to make concessions to Iran. They need to set clear and unequivocal demands before it: Iran must halt all enrichment of nuclear material. It must remove from its territory all nuclear material that has been enriched up until now and it must dismantle the underground nuclear facility in Qom. Only thus will it be possible to ensure that Iran will not have a nuclear bomb. This is Israel's position; it has not changed and it will not change.”
…………………
.
My Take: Same as before…
‘END GAME’ Up!

I for one STILL believe the Israeli ‘End Game’ has been reached! That the decision to attack has already been made and that even the date has been pretty much finalized.
.
We have gone from hearing ALL those Israeli War Drums to the lockdown of most of the mouths of those Israelis in the know.
.
Even the Obama Administration leakers have been shut down and left out in the cold. For you see… from here on out, whatever our Israeli friends do, we surely will not find out until it has already happened. And THAT is exactly the way it is supposed to be.
.
I guess now is a good time to mention that the next round of useless nuclear talks between Iran and the P5+1 Nations, (Britain, China, France, Russia and the United States… plus Germany,) is still on schedule for this Wednesday, May 23rd in Baghdad, Iraq. I just don’t see any serious results through diplomacy happening with Iran this Wednesday, or ever!
.
And as I’ve said before… soon after this failed Wednesday meeting, we should surely see many an Israeli leader coming out and doing all kinds of trashing of President Obama and his failed Foreign Policies.
.
I also think that soon after Wednesday’s meeting, we will again start to hear the war drums beating in the MSM as they were just a few months ago.
.
Sooo… sit back and wait for the news my friends.
Its coming and SOON!
For the END GAME is up.
..............
AubreyJ………
Aubrey J. Fawcett
AubreyJ.org
.
Posted by AubreyJ......... at 5/20/2012 04:50:00 PM