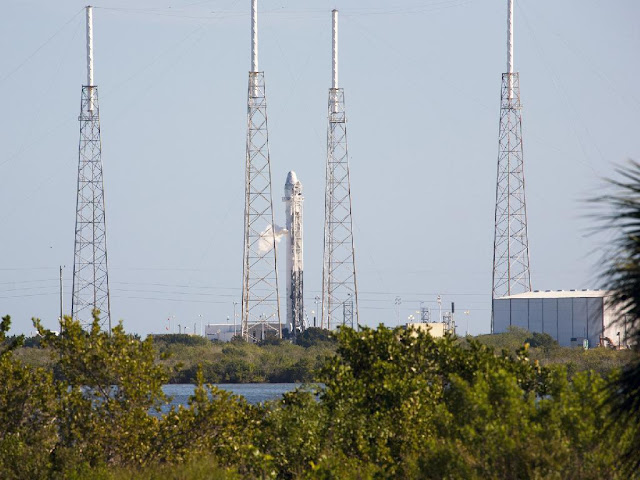 .
The SpaceX Falcon 9 Rocket with its Dragon Spacecraft was stood vertical overnight on the launch pad at Space Launch Complex-40 at Cape Canaveral Air Force Station in Florida. At this time, we still have a “GO” for Launch.
Read more HERE
………………
.
Launch Date: Saturday, May 19th, 2012
Launch Time: 3:55am CDT
…
* Launch Coverage:
Watch Launch LIVE at…

* SPACEX.com - Video/Info LIVE Feeds HERE
………………………………………
.
About Mission: Dragon Spacecraft built by SpaceX will head to the International Space Station with about 1,200 pounds of cargo during its demonstration mission, including commemorative patches and pins, 162 meals and a collection of student experiments.
.
Since the company's rocket and spacecraft are conducting a test flight, the manifest attests to important goods for the station's crew of astronauts and cosmonauts, but not mission-critical items.
.
A successful flight, due to liftoff from Cape Canaveral Air Force Station, Fla., at 3:55am CDT on May 19th, is expected to lead to regular cargo missions that will carry a wider range of goods to the orbiting laboratory. Hawthorne, Calif.-based SpaceX, formally known as Space Exploration Technologies, is also deep into the work required to make Dragon suitable to carry people into orbit.
Read the rest HERE
.…….………
.
UPDATE: 4:00am CDT
.
WELL CRAP!!!
Countdown clock went down to zero and the rocket just sat there!!!
Flight computer saw something it didn’t like and shut everything down… And I’m sure that was a good thing. But DAMN, I really wanted to see her fly this morning… OHHHH well…
Next launch attempt will be on Tuesday if all goes as planned.


.…………………
.
Post UPDATE:
Saturday, May 19, 2012
11:00amCDT
.
SpaceX Engine to be Inspected
Next Launch Opportunity will be this Tuesday, May 22nd
(Launch Time 2:44am CDT)
.
Engineers will physically inspect engine 5 on the SpaceX Falcon 9 after high pressure readings from the engine prompted a launch abort half-a-second before liftoff, SpaceX officials said during a briefing Saturday morning.
.
The next launch attempt could come as early as this Tuesday, May 22nd, (Launch Time 2:44am CDT,) but that determination won't be made until after the inspection, said Gwynne Shotwell, President of Space Exploration Technologies of Hawthorne, Calif., known as SpaceX.
.
There’s also another launch opportunity on Wednesday, May 23rd.
* Read more HERE
…………………………
.
Well… all we can do now is wait and see!
.
With all the delays this sucker has been having just to get off the ground… makes me wonder if the SpaceX bunch can even come close to guiding the Dragon Spacecraft anywhere near the International Space Station when they finally do get her off the ground. Not to mention actually hooking UP with it! Really hope none of this comes out to be the case… What a setback THAT would be!
AubreyJ………
.
All info from the NASA.gov website - Image credit: NASA/Gianni Woods
.......................................................
In case you missed it -- Here it is again!