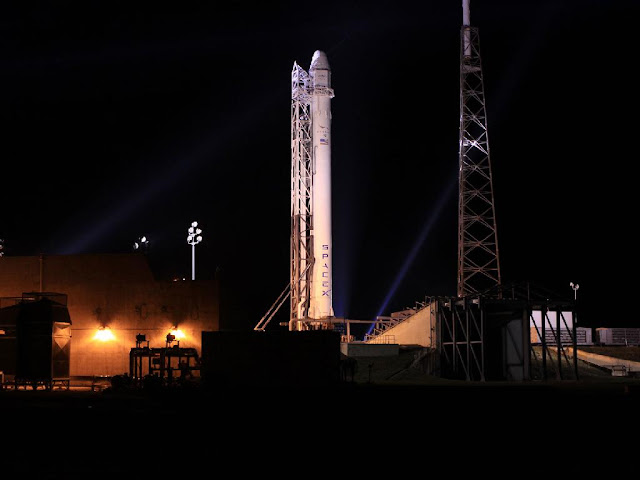 Photo credit: NASA/Jim Grossmann
.
Falcon 9 and Dragon Standing at Launch Pad
Post Date:
Monday, May 21, 2012
9:3am CDT
.
The SpaceX Falcon 9 Rocket is standing atop Space Launch Complex-40 this morning at Cape Canaveral Air Force Station in Florida following inspections on an engine that shut down during Saturday's launch attempt. SpaceX has confirmed the Falcon 9 Rocket is on track to launch early Tuesday morning, May 22nd, at 2:44am CDT.
………………
Launch Date: Tuesday, May 22, 2012
Launch Time: 2:44am CDT
…
* Launch Coverage:
Watch Launch LIVE at… 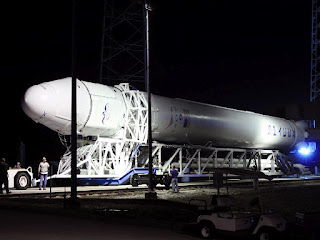 .Photo credit: NASA/Jim Grossmann
About Mission: Dragon Spacecraft built by SpaceX will head to the International Space Station with about 1,200 pounds of cargo during its demonstration mission, including commemorative patches and pins, 162 meals and a collection of student experiments…
Read the rest HERE
.…….………
. 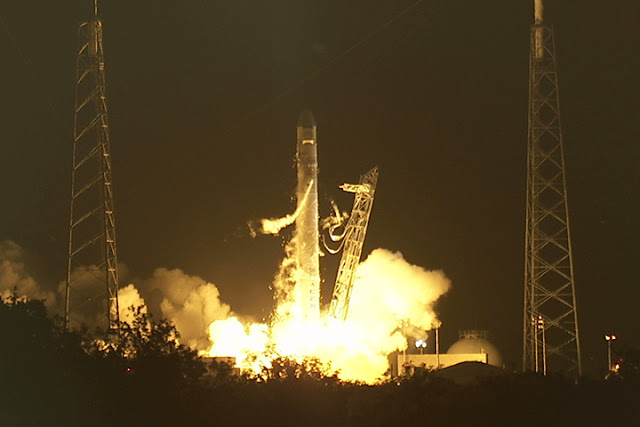 Image credit: NASA TV
.
POST UPDATE:
Liftoff!!!
Of SpaceX Falcon 9 and Dragon!
And what a beautiful sight it was to see.
Early Tuesday morning…
May 22, 2012
2:44am CDT
.
SpaceX Falcon 9 and its Dragon Spacecraft have successfully launched from Cape Canaveral Air Force Station in Florida and are now heading into space, chasing down the International Space Station for hopefully a successful hookup in just a few days time.
.
So far so good!
And… great job SpaceX Team on getting her into space, error free…
Yes sir -- JOB WELL DONE!