Two astronauts will venture outside the International Space Station (ISS) tonight to begin constructing a giant robot and help deliver Japan's first orbital room to the high-flying laboratory... Clad in their NASA-issue spacesuits, spacewalkers Rick Linnehan and Garrett Reisman are slated to begin the first of five planned excursions for their packed construction mission at about 8:23pm CDT.
Read this report at Space.com
*******************************
Watch the Spacewalk Tonight
On NASA TELEVISION
Thursday evening, March 13, 2008
Spacewalk should start around 8:23pm CDT 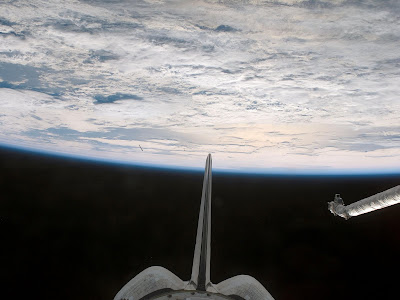 The crews of space shuttle Endeavour and the International Space Station have completed their first day as an orbital team, beginning 12 days of joint operations.

About an hour before docking, which occurred at 11:49 p.m. EDT Wednesday, STS-123 Commander Dominic Gorie guided the shuttle through a back-flip maneuver, giving the Expedition 16 crew the opportunity to take pictures of the orbiter’s protective heat-resistant tiles. These photos were sent to engineers on Earth for analysis.
..
The STS-123 and Expedition 16 crews opened the hatches between Endeavour and the station at 1:36 a.m. The crews then spent time preparing for the first of five scheduled STS-123 spacewalks, which Mission Specialist Rick Linnehan and Expedition 16 Flight Engineer Garrett Reisman will begin at 9:23 p.m. EDT Thursday evening.
Shortly after Endeavour’s arrival at the station, Reisman traded places with Flight Engineer Léopold Eyharts, a European Space Agency astronaut, to join the Expedition 16 crew. Eyharts will return to Earth aboard Endeavour.
...
In addition, the STS-123 crew will install the Canadian-built Dextre – the final element of the station’s Mobile Servicing System – and the Japanese Logistics Module - Pressurized Section, which is the first component of the Japan Aerospace Exploration Agency’s Kibo laboratory.
Info from the NASA.gov website
***********************
Read Latest News and Updates +
Mission Elapsed Time Clock
at NASA.gov
************
Watch the Spacewalk
* HERE *
ENJOY!!! 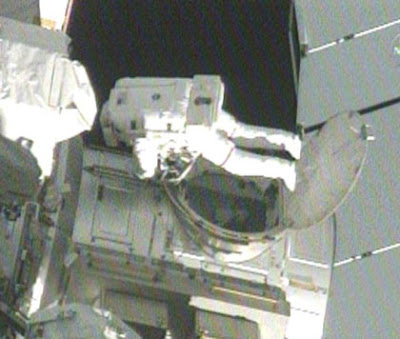 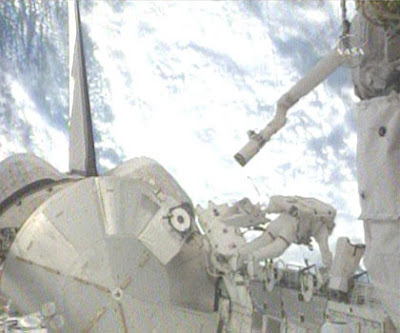