President Bush's Saturday Radio Address
Saturday, March 08, 2008
THE PRESIDENT: Good morning. This week, I addressed the Department of Homeland Security on its fifth anniversary and thanked the men and women who work tirelessly to keep us safe. Because of their hard work, and the efforts of many across all levels of government, we have not suffered another attack on our soil since September the 11th, 2001. 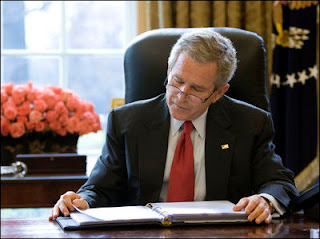 This is not for a lack of effort on the part of the enemy. Al Qaida remains determined to attack America again. Two years ago, Osama bin Laden warned the American people, "Operations are under preparation, and you will see them on your own ground once they are finished." Because the danger remains, we need to ensure our intelligence officials have all the tools they need to stop the terrorists.

Unfortunately, Congress recently sent me an intelligence authorization bill that would diminish these vital tools. So today, I vetoed it. And here is why:

The bill Congress sent me would take away one of the most valuable tools in the war on terror -- the CIA program to detain and question key terrorist leaders and operatives. This program has produced critical intelligence that has helped us prevent a number of attacks. The program helped us stop a plot to strike a U.S. Marine camp in Djibouti, a planned attack on the U.S. consulate in Karachi, a plot to hijack a passenger plane and fly it into Library Tower in Los Angeles, and a plot to crash passenger planes into Heathrow Airport or buildings in downtown London. And it has helped us understand al Qaida's structure and financing and communications and logistics. Were it not for this program, our intelligence community believes that al Qaida and its allies would have succeeded in launching another attack against the American homeland.

The main reason this program has been effective is that it allows the CIA to use specialized interrogation procedures to question a small number of the most dangerous terrorists under careful supervision. The bill Congress sent me would deprive the CIA of the authority to use these safe and lawful techniques. Instead, it would restrict the CIA's range of acceptable interrogation methods to those provided in the Army Field Manual. The procedures in this manual were designed for use by soldiers questioning lawful combatants captured on the battlefield. They were not intended for intelligence professionals trained to question hardened terrorists.

Limiting the CIA's interrogation methods to those in the Army Field Manual would be dangerous because the manual is publicly available and easily accessible on the Internet. Shortly after 9/11, we learned that key al Qaida operatives had been trained to resist the methods outlined in the manual. And this is why we created alternative procedures to question the most dangerous al Qaida operatives, particularly those who might have knowledge of attacks planned on our homeland. The best source of information about terrorist attacks is the terrorists themselves. If we were to shut down this program and restrict the CIA to methods in the Field Manual, we could lose vital information from senior al Qaida terrorists, and that could cost American lives.

The bill Congress sent me would not simply ban one particular interrogation method, as some have implied. Instead, it would eliminate all the alternative procedures we've developed to question the world's most dangerous and violent terrorists. This would end an effective program that Congress authorized just over a year ago.

The fact that we have not been attacked over the past six-and-a-half years is not a matter of chance. It is the result of good policies and the determined efforts of individuals carrying them out. We owe these individuals our thanks, and we owe them the authorities they need to do their jobs effectively.

We have no higher responsibility than stopping terrorist attacks. And this is no time for Congress to abandon practices that have a proven track record of keeping America safe.

Thank you for listening.