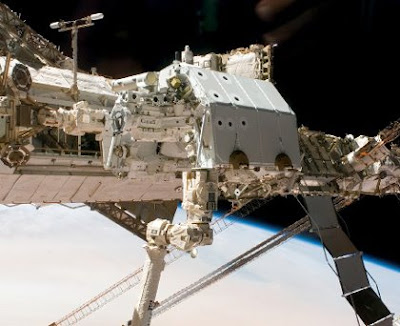 Photo credit: NASA
*************
Dextre, the final element of the International Space Station’s Mobile Servicing System, will be put together today during the second spacewalk of STS-123. Mission Specialists Rick Linnehan and Mike Foreman are slated to begin their orbital stroll at 7:23pm CDT.

The two spacewalkers will assemble the stick-figure-shaped Dextre, also known as the Special Purpose Dextrous Manipulator (SPDM), a task that includes attaching its two arms.

Throughout the day, the station and shuttle crew members will continue outfitting the Japanese Logistics Module - Pressurized Section (JLP). The JLP is the first pressurized component of the Japan Aerospace Exploration Agency’s Kibo laboratory and the newest component of the station.
Info from the NASA.gov website
*********************************
Read Latest News and Updates +
Mission Elapsed Time Clock
at NASA.gov
********************
Watch the Spacewalk Live HERE
ENJOY!!!
********
UPDATE: Sunday, March 16, 2008
10:00am CDT
* Crew Assembles Dextre During Second Spacewalk *
...
Dextre, the final element of the International Space Station’s Mobile Servicing System, was successfully put together, this early Sunday morning, during the second of five scheduled spacewalks of the STS-123 mission. Linnehan and Foreman completed their 7-hour, 8-minute orbital stroll early this morning at 1:57am CDT.