Mission Specialists Robert L. Behnken and Mike Foreman are slated to begin the mission’s fifth and final spacewalk this Saturday evening at 4:23pm CDT. Their tasks include stowing the OBSS on the station’s S1 Truss, where it will be picked up by the STS-124 crew aboard space shuttle Discovery, set to launch in May.
******************************** 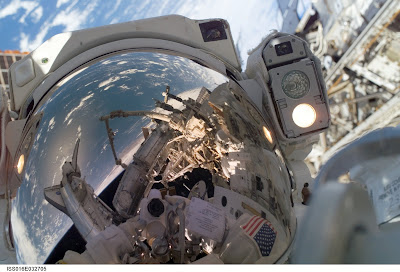 About Photo: March 13/14 , 2008 - Astronaut Garrett Reisman, Expedition 16 flight engineer, uses a digital camera to expose a photo of his helmet visor during the mission's first scheduled session of extravehicular activity (EVA) as construction and maintenance continue on the International Space Station. Also visible in the reflections in the visor are various components of the station, the docked Space Shuttle Endeavour and a blue and white portion of Earth. During the seven-hour and one-minute spacewalk, Reisman and astronaut Rick Linnehan (out of frame), STS-123 mission specialist, prepared the Japanese logistics module-pressurized section (JLP) for removal from Space Shuttle Endeavour's payload bay; opened the Centerline Berthing Camera System on top of the Harmony module; removed the Passive Common Berthing Mechanism and installed both the Orbital Replacement Unit (ORU) tool change out mechanisms on the Canadian-built Dextre robotic system, the final element of the station's Mobile Servicing System.
Photo Credit: Astronaut Garrett Reisman - NASA
**************************************************

UPDATE: 5:00pm CDT
Mission Specialists Robert L. Behnken and Mike Foreman began the Fifth Spacewalk today at 3:34pm CDT. Rick Linnehan, also a mission specialist, is coordinating their activities from inside the orbiting complex made up of space shuttle Endeavour and the International Space Station.

Behnken and Foreman are tasked with stowing the Orbiter Boom Sensor System (OBSS) on the station’s S1 Truss. With the OBSS in the grip of the station’s robot arm, the two spacewalkers will assemble an umbilical designed to keep the boom safe while it is stored in the harsh space environment. Then, the robot arm will hand the OBSS off to Behnken and Foreman, who will stow it on the truss.

The next component of the Japan Aerospace Exploration Agency’s Kibo laboratory, which will be delivered on space shuttle Discovery during the STS-124 mission, is too large to accommodate the OBSS in the shuttle’s payload bay. Once the next element of Kibo is installed on the station, Discovery’s astronauts will detach the OBSS left behind by space shuttle Endeavour, use it to perform tile inspections and bring it home. When the STS-123 spacewalkers have successfully attached the boom to the S1 Truss, they will release launch locks on two of the Harmony module’s common berthing mechanisms and install trunnion covers on the Japanese Logistics Module – Pressurized Section. They also will perform other tasks including an inspection of the starboard Solar Alpha Rotary Joint.

In addition, the spacewalkers are tasked with installing the Materials International Space Station Experiment 6 on the outside of the European Space Agency’s Columbus laboratory, an activity the astronauts were unable to complete during the mission’s third spacewalk.

With the final STS-123 spacewalk complete, flight day 14 will see the crew of Endeavour prepare for the end of their visit to the station. The orbiter will undock Monday and return to Earth Wednesday.
Info taken from the NASA.gov website
**************