He said the USS Port Royal, USS Hopper, USS Ingraham were inbound to the Persian Gulf via the Strait of Hormuz yesterday morning. The ships were in the midst of a routine transit in the early daylight hours, the admiral said. Five Iranian Revolutionary Guard high-speed craft came from the north and approached the U.S. ships. 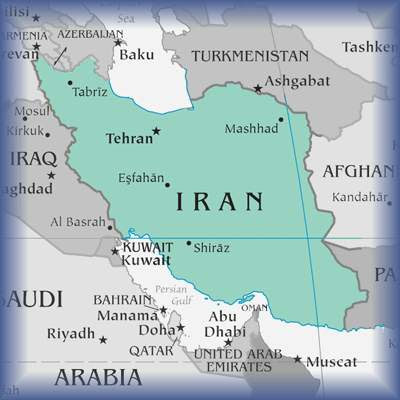 "The five boats approached the U.S. formation on its starboard bow in international waters slightly inside the Gulf from the apex of the strait," Cosgriff said.

The Iranian boats broke into two groups and went on both sides of the U.S. formation. "The groups maneuvered aggressively in the direction of the U.S. ships," Cosgriff said.

U.S. captains called on the radio and sounded the ships' horns to warn the Iranians off, he said. "The (U.S.) ships received a radio call that was threatening to our ships to the effect that they were closing our ships and that the U.S. ships would explode," Cosgriff said.

Subsequently, U.S. sailors observed two of the Iranian boats dropping objects in the water generally in the path of the USS Ingraham. "These objects were white box-like objects that floated," the admiral said. "Obviously the Ingraham passed by safely."

The boats maneuvered close astern, and after 30 minutes they returned in the direction from which they came, back toward Iranian territorial waters. The Iranian boats approached within 500 yards of the U.S. ships, the admiral said.

"It was transit passage in international waters incidental to a routing inbound transit of the Strait of Hormuz," Cosgriff said. "The U.S. ships were clearly marked. It was daylight, (with) decent visibility.

"The behavior of the Iranian ships was unnecessary," he continued, "without due regard to safety of navigation and unduly provocative in the aggregate of their maneuvers, the radio call and the dropping of objects in the water."

The admiral praised the U.S. ships' crews, saying they stepped through procedures carefully, with good discipline and with due regard for all the factors. "I was very proud of their performance and the training they received," Cosgriff said.
From news articles by DoD’s American Forces Press Service
Map from CENTCOM
.
Read more from DoD at links below...
* Iranian Boats Provoke 'Serious Incident' in Straits of Hormuz
** DoD News Briefing with Vice Adm. Cosgriff at the Pentagon, Arlington, Va.
**********
Video: Pentagon Briefing - January 07, 2008

****************
>>> TimesOnLine.co.uk has a great write-up on this story and it goes in part like this-- ...it was the warning transmitted as they closed in that threatened to turn a potentially hostile maneuver into a dangerous incident that could have spiraled out of control. “I am coming at you, you will explode in a couple of minutes,” the message said...
Read the rest at link below...
‘Reckless’ Iranians threaten to blow up American warships in the Gulf
....................
>>> DAWN.com has this take...
US warns Iran of tough action after Gulf face-off