Surge, Strategy Working in Iraq
But Challenges Remain, Petraeus Says
Written by Donna Miles
Tuesday, January 08, 2008
As the troop surge in Iraq approaches its one-year anniversary, the commander of Multinational Force Iraq said he's buoyed by successes made and momentum built, but recognizes the job is far from over. 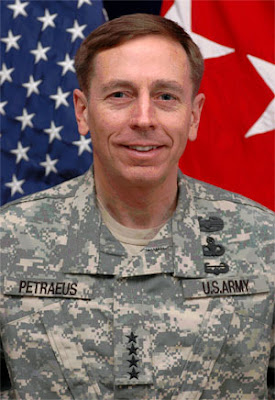 Army Gen. David H. Petraeus told the Pentagon Channel the new strategy in Iraq -- with more coalition and Iraqi troops helping quell violence in and around Baghdad and operations that promote closer cooperation with the Iraqi population -- has helped stabilize once-violent areas.

President Bush announced the strategy during a Jan. 10, 2007, televised speech to the nation. The plan included more than 20,000 additional U.S. troops on the ground in Baghdad and Anbar province, increased responsibility for the Iraqi government and Iraqi security forces, and more diplomatic and economic initiatives.

Strolling a Baghdad street considered too dangerous to navigate just a year ago, Petraeus noted the contrast to last year, when shops and schools were closed, playgrounds were still, and many facilities were without electricity. "And today, we now find those features here, and we are able to stroll along and even to eat some Iraqi bread," he said.

"The security has been a result, certainly, of more coalition and Iraqi forces," he said. "But it's also the employment of those forces."

Petraeus credited the U.S. troop surge, along with an additional 110,000 Iraqi soldiers and police, with providing critical manpower needed to rout insurgents. But another vital part of the formula was the new strategy in which the troops began living among the people they were securing.

This presence helped gain the trust and confidence of the Iraqi people, and ultimately, their support as well, he said. They began "turning in the bad guys in their midst, ... pointing out the weapons caches or identifying improvised explosive devices, and ultimately volunteering to help with security as neighborhood watches, concerned local citizens and so forth," he said.

Petraeus called the outcome a classic example of perspiration meeting opportunity. "And a lot of our leaders would like to think that is what happened over the course of this past year, that they were ready for certain situations and when they saw opportunities, they were willing to take risks," he said.

In taking those risks, leaders knew their higher chain of command was willing to underwrite the risks and that the Iraqis were willing to take them, too, he said. "And the fact is that they took them, together with their Iraqi partners," he said.

Petraeus credited the Iraqis who "have courageously stood and fought," suffering losses two to three times higher than those of the United States. "They are putting it all on the line, just as our troopers and our leaders," he said. "And it has been very gratifying, actually, to see the results of all this over time."

But Petraeus was quick to say the fight has not been won. Al Qaeda continues to be "public enemy No. 1 in Iraq," and although most of its forces may have been flushed out of Baghdad and Anbar province, they remain "very potent," he said.

"Let's not forget that al Qaeda in Iraq is still intent on reigniting ethno-sectarian violence, on carrying out acts of horrific violence, of damaging the infrastructure and killing innocent Iraqis and going after us," he said.

Their indiscriminate violence, particularly against Iraqi citizens, has backfired on the extremists, Petraeus said. "That is, of course, what has turned the Sunni Arab population against al Qaeda (in) Iraq over the course of the last year," he said. "That is what has made their job more difficult and has led different neighborhoods to reject them over time, as they have seen that al Qaeda has brought them nothing but literally death, destruction and oppression."

But al Qaeda isn't the only challenge to stability, the general said. He pointed to a broad range of other enemies: militia extremists; "special groups" trained, funded and equipped by Iran; and criminal elements, among them.

"There are many, many challenges," he said. "Obviously the challenges are to build on the gains in security, to try to turn situations that are still transitory or tenuous into a degree that has more performance ... (and) is more self-sustaining."

That involved more than just security, he said. It involves reviving local economies, getting markets going again, restoring schools and helping the government ministries develop -- efforts Petraeus said require U.S. security forces to work hand in hand not just with their Iraqi counterparts in the army and police, but also their ministry and embassy partners.

All that will take time, he emphasized. Petraeus said he recognizes the timetables many people want to attach to the mission in Iraq, but he tries not to worry about "all the clocks that are running out there."

"Our job is to try to speed up the progress in Iraq as much as we can with our Iraqi counterparts," he said. Petraeus said he hopes that will help others "to see that there is progress, to see that there is hope, and decide to continue to support what is really a very, very important endeavor for the United States, ... for all the countries of the coalition, ... and of course, (for) Iraq and the region."

Petraeus said he believes the coalition and Iraqis can sustain the progress made under the surge, even as the drawdown continues.

With one brigade combat team and a Marine expeditionary unit already gone without being replaced, and four more BCTs and two Marine battalions to leave by late July, Petraeus said, he believes there's "a solid plan" to maintain the momentum they helped to build.

But he's quick to say "there will be more tough moments ... and bad days" as the coalition and Iraqis continue to pursue extremists and prevent them from establishing new safe havens.

"There are some tough enemies out there, and innumerable obstacles and challenges," he said. "So it will not be easy, but we believe that we can indeed continue to build on what we have accomplished so far."

Petraeus said he and many of his fellow commanders "have sworn off words like 'optimism' or 'pessimism'" to describe the Iraq mission. "We just use the word 'realism,'" he said. "And reality is that Iraq is very hard. It is going to remain very hard, and it is going to take determination, assistance, additional resources, additional time and occasionally, sheer force of will."

As military leaders continue focusing on the mission, Petraeus emphasized the importance of relationships in achieving common goals in Iraq.

About Video: An interview with Commander of Multi-National Forces, Iraq, General David Petraeus.
Posted on web by PentagonChannel.mil