A four-day counter-terror operation in Shechem (Nablus) has come to a close. Explosives and rocket labs were located and destroyed in the Shomron city... An IDF statement reported that a weapons cache and an explosives laboratory, as well as various types of weaponry, were found and confiscated with help from the Shabak (General Security Service)...
Story, photos, Video and more at IsraelNationalNews.com 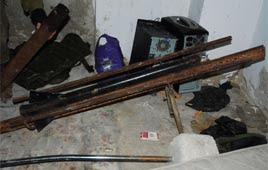