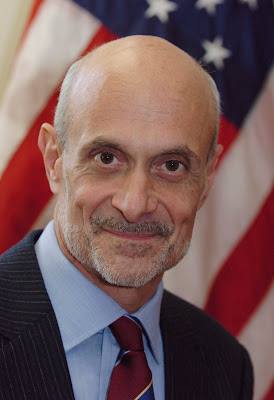 “The American public’s desire for greater identity protection is undeniable,” said Homeland Security Secretary Michael Chertoff. “Americans understand today that the 9/11 hijackers obtained 30 drivers licenses and ID’s, and used 364 aliases. For an extra $8 per license, REAL ID will give law enforcement and security officials a powerful advantage against falsified documents, and it will bring some peace of mind to citizens wanting to protect their identity from theft by a criminal or illegal alien.”

The problems that Americans face from document fraud are diverse and growing. A Public Opinion Strategies poll taken last year shows that more than 80 percent of the American public favors secure identification to prevent terrorism and identity theft. Identity theft has increased by nearly 800 percent from 2000 to 2006, according to the Federal Trade Commission. U.S. Immigration and Customs Enforcement made 863 criminal arrests during various worksite enforcement operations in fiscal year 2007 - more than 500 were charged with crimes relating to federal and state document fraud - and their Identity and Benefit Fraud Units made 1,211 criminal arrests for document fraud related charges. The U.S. Secret Service made 4,348 arrests last year for identity theft or financial fraud crimes, accounting for approximately $690 million in actual fraud loss to individuals and financial institutions. In a sampling of Secret Service identify theft cases from 2000 to 2006, fraudulent drivers’ licenses were used 35 percent of the time.

REAL ID will address document fraud by setting specific requirements that states must adopt for compliance, to include: (1) information and security features that must be incorporated into each card; (2) proof of the identity and U.S. citizenship or legal status of an applicant; (3) verification of the source documents provided by an applicant; and (4) security standards for the offices that issue licenses and identification cards.

The first deadline for compliance with REAL ID is Dec. 31, 2009. By then, states must upgrade the security of their license systems, to include a check for lawful status of all applicants, to ensure that illegal aliens cannot obtain REAL ID licenses. Some states are expected to be compliant well before that time. Compliance will be needed for access into a federal facility, boarding commercial aircraft, and entering nuclear power plants. Federal agencies will continue to accept licenses for official purposes from residents of states that comply with the law.

DHS is making approximately $360 million available to assist states with REAL ID implementation - $80 million in dedicated REAL ID grants and another $280 million in general funding as part of the Homeland Security Grant Program.

The 73 percent cost reduction – from an original estimate of $14.6 billion to approximately $3.9 billion – was achieved mainly by giving states greater flexibility in issuing licenses to older Americans. Enrollment will be completed for all individuals under 50 years of age by Dec. 1, 2014. For all others, enrollment may be extended three additional years to Dec. 1, 2017. At that time, all state-issued drivers’ licenses and identification cards intended for official federal purposes must be REAL ID compliant.

REAL ID was a core 9/11 Commission finding and mandated by Congress in the REAL ID Act of 2005. This final rule follows a Notice of Proposed Rule Making published in the Federal Register on March 9, 2007. Based on comments received from various stakeholders, DHS drafted the final rule to substantially reduce costs and account for investments that many states have already made to improve the security of their drivers’ licenses.