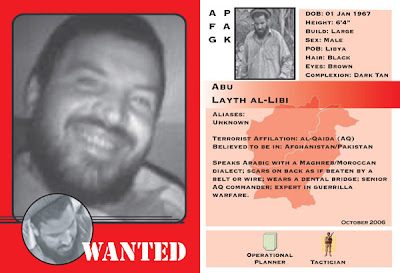 BBC News brings us this report today and it starts off like this... A senior al-Qaeda leader in Afghanistan, Abu Laith al-Libi, has been killed, Western counter-terrorism officials have told the BBC... News of his death emerged on a website used by Islamist groups. Ekhlaas.org said he had "fallen as a martyr"... There is speculation that he was killed by a US missile strike in the North Waziristan area of Pakistan this week... A dozen militants were reported killed in the attack. US intelligence agencies said they were checking the reports...
Read this good news at link below...
Top al-Qaeda leader reported dead
* BBC News also has this Profile Report on Abu Laith al-Libi

>>> CounterTerrorismBlog.org has this take on the story... He may not be Usama Bin Laden or Dr. Ayman al-Zawahiri--and he may not be a household name--but Abu al-Laith al-Liby was certainly among Al-Qaida's most senior military commanders, and his reported death now leaves Al-Qaida and the Taliban with a significant short-term leadership vacuum on the ground in Afghanistan...
Read the rest at link below...
Abu al-Laith al-Liby: Al-Qaida Loses a Guiding Light
DIA Photo/InfoSheet
********
Top Al-Qeada Leader Reported Dead
News Video posted on LiveLeak by: barnesy
Posted by AubreyJ......... at 1/31/2008 08:09:00 PM