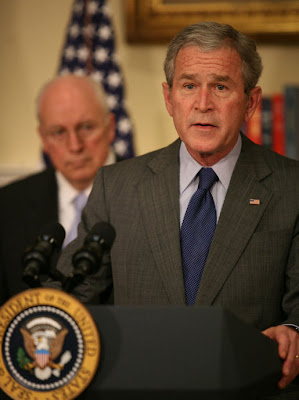 About Photo: With Vice President Dick Cheney looking on, President George W. Bush delivers a statement in the Roosevelt Room of the White House Friday, January 18, 2008, regarding the economy of the United States.
Transcript/Video and more can be found at links below...
* President Bush Discusses Economy, Growth Package
* Fact Sheet: Taking Action to Keep Our Economy Healthy
White House photo by Joyce N. Boghosian
*******************

>>> FOXBusiness.com has this report...
President Bush, acknowledging the risk of recession, embraced about $145 billion worth of tax relief and other incentives Friday to give the economy a "shot in the arm.” ... Bush said such a growth package must also include tax incentives for business investment and quick tax relief for individuals. And he said that to be effective, an economic stimulus package would need to roughly represent 1 percent of the gross domestic product -- the value of all U.S. goods and services and the best measure of the country's economic standing...
President Calls for $145B Economic Stimulus Package

>>> WashingtonTimes.com reports it this way...
President Bush today said there is "real concern" about the economy and called on Congress to quickly pass an economic relief package that provides tax incentives for small businesses and rebates for individual consumers... Congressional leaders continued to negotiate the details of the package, which is expected to include a rebate of between $300 and $800 for taxpayers...
Bush's relief package offers $800 rebates