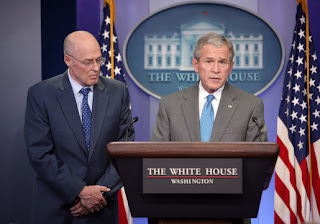 * The White House, Office of the Press Secretary...
President Bush Discusses the Bipartisan Economic Growth Agreement
Has Video and more links to check out too

* CQPolitics.com has this take on the story... Congressional leaders and the Bush administration announced Thursday a compromise economic stimulus package built around rebates for most taxpayers and incentives for business investment... The measure also would make it easier for homeowners to refinance their adjustable rate mortgage loans into fixed-rate mortgages insured by the Federal Housing Administration...
Read this report in full at link below...
Hill Leaders, White House Strike Deal on Stimulus Package
White House photo by Chris Greenberg
Posted by AubreyJ......... at 1/24/2008 11:00:00 AM