California Burning In The Winds
Thursday, October 25, 2007
(Note: This post on top today - Scroll for newer post below)

MercuryNews.com brings us this report this morning and it starts off like this... San Diego County authorities today said they have discovered the bodies of two more people believed to have been killed in the wildfires that scorched Southern California this week... Recovery crews found the burned bodies in a gutted home near 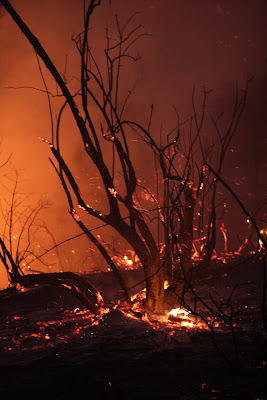 Poway, north of San Diego, Sheriff Bill Kolender said. He had no other details but said medical examiners were trying to establish their identities... The discovery brings to eight the total number of deaths connected to the fires... The grim announcement came on a day when officials were otherwise upbeat. Prospects for gaining control of some of the most severe fires heightened as the Santa Ana winds calmed and temperatures dropped...
Read the rest HERE
...
About photo on right: Wildfires burn near Camp Horno on Camp Pendleton, Calif., October 23, 2007.
U.S. Marine Corps photo by Lance Cpl. Grant T. Walker
......
USAToday.com has this report... Despite a dramatic drop in high winds and record temperatures, wildfires raged out of control in two Southern California counties on Thursday, but firefighters battling 10 fires were at least able to throw more men, water and airplanes into the battle in hopes of reining in some of the blazes...
Read story in full at link below...
Calmer winds aid firefighters, but danger far from over
......
The ABCNews.go.com website has this report and it goes in part like this... On the fire lines, a massive aerial assault and a break in the harsh winds that had fanned the flames throughout the week were helping firefighters make their first major progress... The hot, dry Santa Ana winds that have whipped the blazes into a destructive, indiscriminate fury since the weekend were expected to all but disappear...
Read in full at link below...
Calif. Fires May Be at Turning Point
*************
.
* More Information on the California Wildfires...
HERE and HERE
.
*****************************
Southern California Wildfires from Int. Space Station
About Video: NASA Video from the International Space Station shows the Southern California Wildfires
Info/Video posted on LiveLeak by: jdischord
*****************************
.
I will post more on this terrible story over the next few days.
But again I say... God’s speed to all of those who are helping in the effort to fight these terrible... ongoing fires.
.
I also send out my thoughts and prayers to those who lost their lives, to their families, friends and loved ones... to the families that have been evacuated from their homes... and to those who have lost everything.
.
God bless each and every one of you...
AubreyJ.........
Posted by AubreyJ......... at 10/25/2007 07:00:00 PM