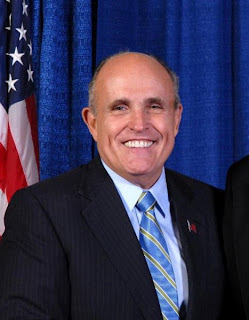 Here’s a good read I came across early this morning by Robert Novak at the RealClearPolitics.com website. It starts off like this... The most surprising recent national polling result was an answer given by Republicans who attend church weekly when Gallup asked their presidential preference. A plurality chose Rudy Giuliani, a Catholic who in 1999 said: "I don't attend regularly, but I attend occasionally." Their choice raises deep concern among prominent conservative Republicans who feel it would be a serious mistake for leaders of the religious right to scorn the former mayor of New York...
Read the rest at link below...
Rudy and Religion
.
Photo Credit, Jason Bedrick-Wikipedia
Posted by AubreyJ......... at 10/15/2007 06:50:00 AM