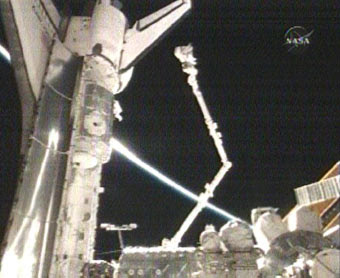 Parazynski and Wheelock removed and stowed the S-band Antenna Structural Assembly which is being returned to Earth on Discovery. Next, they secured a Payload and Data Grapple Fixture onto Harmony that could not be in place during launch, removed contamination covers and disconnected the power cables linking Harmony to Discovery.

When the spacewalkers’ preparations were complete, the station robotic arm operators removed Harmony from the payload bay and moved it to its position on Unity. Meanwhile, the spacewalkers prepared the P6 truss for its relocation.