California Burning In The Winds
Tuesday, October 30, 2007
...
Victory in sight for firefighters battling California blazes..
* LATimes.com brings us this report and it starts off like this... Firefighters hurried Monday to control the stubborn wildfires that continued to burn throughout Southern California before the Santa Ana winds return this week... Forecasters are predicting offshore winds by the weekend, though the ferocity was expected to be less than the gale-force winds that spread wildfires through the region's bone-dry tinder last week. Moist air and lower temperatures in recent days have helped firefighters battle the blazes.
Read the rest HERE
***************************** 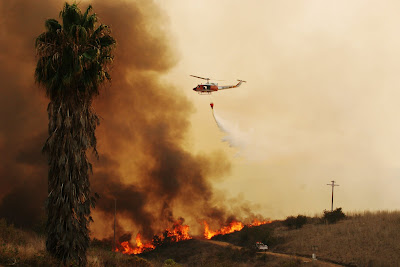 According to U.S. Northern Command officials, Air Force Reserve and Air National Guard C-130s flew 10 sorties yesterday dropping fire retardant. They will continue the mission today. The aircraft have flown 74 sorties since arriving in southern California.
.
The Global Hawk, the Air Force's state-of-the-art unmanned aerial vehicle, flew missions to spot fires, as did an Air Force U-2 reconnaissance plane and a Navy P-3C Orion.
.
On the ground, more than 2,700 California Guardsmen are working in a variety of roles from firefighting to security and communications assistance.
.
In addition, the Army Corps of Engineers is helping to coordinate public works and engineering support for the Federal Emergency Management Agency, NORTHCOM officials said. The Corps is addressing four emergency support missions under FEMA: temporary power, temporary housing, planning, and debris removal and disposal.
.
The wildfires destroyed 2,772 structures and damaged another 437. At their height, the fires forced more than 500,000 people from their homes from an area north of Los Angeles to the Mexican border. California officials said the fires killed seven people and hurt 117. California fire control officials said they expect the fires to be out by November 2nd.
***********************
* DoD’s Web Special Report: Military Helps Fight California Wildfires
* More Information on the California Wildfires...
HERE and HERE
*****************************
** Ledger-Dispatch.com has a report today and it goes in part like this... The state Office of Emergency Services damage tally rose Monday to 2,786 buildings destroyed, including more than 2,000 homes... Clouds streamed inland from the Pacific on Monday and meteorologists predicted areas of drizzle and light showers through Wednesday morning... Fire crews were already benefiting from precipitation in some areas, said Daniel Berlant, a spokesman for the California Department of Forestry and Fire Protection. "We continue to make great progress," he said...
Read story in full at link below...
Residents of fire-scarred Southern California communities mull next step as firefighters keep eye on weather
*****************************
Note: I’ll be posting more on the remaining fires in California over the next few days. But for now, again I say... god’s speed to all of those who are helping in the effort to fight these terrible... and still ongoing fires.
...
I also send out my thoughts and prayers to those who got hurt... to those that lost their lives, to their families, friends and loved ones... to the families that had to be evacuated from their homes... and to those who have lost everything.
...
God bless each and every one of you...
AubreyJ.........
Posted by AubreyJ......... at 10/30/2007 06:37:00 PM