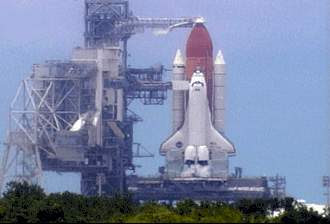 (File photo courtesy of NASA)
(Note: This post next to top today - Scroll for newer post below)

This will be Launch Try #ONE
The seven crew members of space shuttle Discovery’s STS-120 mission are strapped into their seats inside the spacecraft for launch. The countdown remains on track for an 11:38 a.m. EDT lift off. Commander Pam Melroy and Pilot George Zamka have been running through checklists and procedures while the remaining crew took their places. Four of the astronauts will sit on the flight deck, including Melroy and Zamka, and the other three will sit on the middeck, or lower level of the crew compartment.
Info from NASA.gov website Space Shuttle STS-120 Discovery Launched successfully today on-time and is now racing on its way to the International Space Station. More to come in the days ahead...
****************