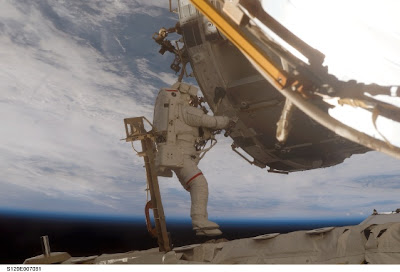 About Photo: (October 28, 2007) Astronaut Scott Parazynski, STS-120 mission specialist, participates in the second of five scheduled sessions of extravehicular activity (EVA) as construction continues on the International Space Station. During the 6-hour, 33-minute spacewalk Parazynski and astronaut Daniel Tani (out of frame), Expedition 16 flight engineer, worked in tandem to disconnect cables from the P6 truss, allowing it to be removed from the Z1 truss. Tani also visually inspected the station's starboard Solar Alpha Rotary Joint (SARJ) and gathered samples of "shavings" he found under the joint's multi-layer insulation covers. Also the spacewalkers outfitted the Harmony module, mated the power and data grapple fixture and reconfigured connectors on the starboard 1 (S1) truss that will allow the radiator on S1 to be deployed from the ground later.

Image Credit: NASA TV
*********************
..
Monday evening: As crew members aboard the International Space Station and Space Shuttle Discovery prepared for the third spacewalk, they learned that the shuttle will spend an extra day in space with landing now scheduled for Nov. 7. The additional docked day has been inserted between the fourth and fifth spacewalks and provides for some crew off duty time along with ample equipment preparation and turnaround for the fifth spacewalk scheduled for Saturday.
.
After analyzing photos of debris found inside the station’s starboard Solar Alpha Rotary Joint, mission managers decided to devote the mission’s fourth spacewalk Thursday to further inspection of the joint.
.
As a precursor to the additional rotary joint inspection spacewalk, Tuesday’s spacewalk by Mission Specialists Scott Parazynski and Doug Wheelock will include a short task to inspect the port rotary joint to provide comparison data to station managers who will spend the night developing procedures for the fourth spacewalk. All other tasks for the third spacewalk remain as trained with the focus being on installation of the P6 truss and solar array pair to its permanent location outboard of the port truss.
.
The crews completed final preparations for the P6 truss installation and continued outfitting and activation of avionics and systems racks inside the Harmony Node. Despite the shutdown of the Carbon Dioxide Removal Assembly in the U.S. Destiny laboratory, work continues as normal with no interruption to operations with other means of carbon dioxide scrubbing equipment on board.
.
The crew day ended with Parazynski and Wheelock beginning their routine overnight “campout” in the Quest airlock. They plan to begin the spacewalk at about 5:28 a.m. EDT Tuesday.
Info from NASA Website.
**********
* 3rd Spacewalk officially began at 4:45 am EDT
And concluded at 11:53 am EDT
.
* TODAY’S SPACEWALK lasted for
7 hours 8 minutes and is now OVER *
***********************
Note: After Tuesday’s Spacewalk...
Discovery STS-120 has two more spacewalks scheduled
* 4th Spacewalk Scheduled for Thursday *
**************
.
* Read the latest updates on Flight/Spacewalks HERE
....
Watch Spacewalks/Mission LIVE
at NASA TELEVISION.... ...
Click HERE to find your preferred Video Player
(It’s under... “Watch NASA TV NOW”)
Windows Media Player is best for Full Screen viewing
ENJOY!!!
*******************************************
.
* STS-120 Interactive Timeline - Click Here *.
************************
...
I’ll be posting on all the spacewalks over the next few days so check back!
And again I say...
GOD SPEED to the Crew of STS-120 DISCOVERY... .
AubreyJ.........
Posted by AubreyJ......... at 10/30/2007 12:02:00 AM