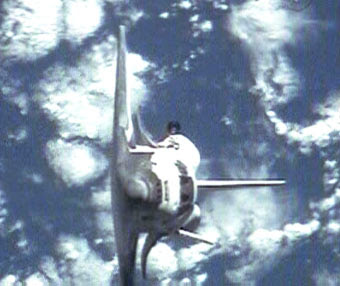 About Above Image: Space shuttle Discovery performs a back-flip over the Atlantic Ocean about an hour before docking to the International Space Station.
Image credit: NASA TV
******************

Space Shuttle Discovery and the STS-120 crew arrived at the International Space Station at 8:40 a.m. EDT, delivering a new module and crew member to the orbital outpost. The STS-120 astronauts and the station’s Expedition 16 crew will conduct pressure and leak checks before the hatches between the two spacecraft open about 10:30 a.m. After the crews greet each other, they will quickly begin joint operations.

...
One of the first major tasks is the station crew rotation. STS-120 Mission Specialist Daniel Tani will switch places with Expedition 16 Flight Engineer Clayton Anderson, who will be wrapping up a four-month tour of duty as an Expedition crew member. Tani is scheduled to stay on the station until he returns to Earth with STS-122 later this year.
.
Tani will officially become a member of Expedition 16 when his custom-made seat liner is swapped out with Anderson’s in the Soyuz spacecraft docked to the station. Also, preparations will begin today for the first of five scheduled STS-120 spacewalks. It is set to kick off at 6:28 a.m. Friday.
Info from NASA.gov website
...
Read Latest News and Updates +
Countdown/Mission Elapsed Time Clock
at NASA.gov
*************
Watch Mission LIVE
at NASA TELEVISION...
Click HERE to find your preferred Video Player (It's under... “Watch NASA TV NOW”)
Windows Media Player is best for Full Screen viewing
ENJOY!!!
...
* STS-120 Interactive Timeline - Click Here *
.
I’ll be posting on all the space walks over the next few days so check back...
*******************
GOD SPEED to the Crew of STS-120 Discovery...
AubreyJ.........
Posted by AubreyJ......... at 10/25/2007 06:45:00 AM