A total of 16 wildfires have burned more than 360,000 acres in Southern California, and hundreds of thousands of people have been evacuated from homes in danger areas, California National Guard officials said today.

California officials said that five people have died as a result of the fires; more than 2,100 homes and other structures have been destroyed or damaged; and more than 87,500 structures are in danger from the fast-moving fires. Santa Ana winds, often blowing at speeds up to 100 miles per hour, have complicated firefighting efforts, officials said.

Fourteen helicopters from the California National Guard, the Navy and Marine Corps are using buckets to drop water on the blazes, officials said.

Everything California has asked the Defense Department for has been delivered, U.S. Northern Command officials said, and command officials are leaning forward to anticipate what the state might need as the crisis continues.

A total of 550 Marines and 17,301 California National Guardsmen are standing by, available for duty if needed. The Marines are going through firefighting training in anticipation of being called. Officials at the National Interagency Fire Center in Boise, Idaho, said that federal firefighters will flow into the area over the next few days.

About 1,400 Navy personnel and their families have been evacuated onto three Navy bases: Coronado, El Centro and San Diego. This clears civilian shelters for more evacuees.

An Aegis cruiser, a guided-missile destroyer and two fast frigates will remain in port to support evacuation and movement of dependents.

This declaration follows on the report made to President Bush by Secretary Michael Chertoff and FEMA Administrator David Paulison, who toured areas impacted by the wildfires and reviewed the federal response efforts in support of local officials in California on Tuesday.
Read the rest at FEMA.gov
Info and photo from the Homeland Security website
Photo by California Governor's Office
.....
* More Information on California Wildfires HERE and HERE
***************************** 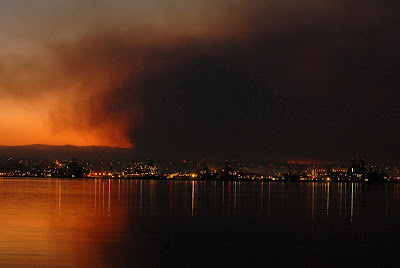 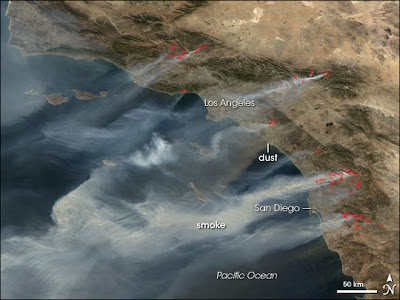 In what seemed like the blink of an eye, wildfires ignited in the paper-dry, drought-stricken vegetation of Southern California over the weekend of October 20, 2007, and exploded into massive infernos that forced hundreds of thousands of people to evacuate their communities. Driven by Santa Ana winds, fires grew thousands of acres in just one to two days. The fires sped down from the mountains into the outskirts of coastal cities, including San Diego. Dozens of homes have burned to the ground, and at least one person has died, according to local news reports. Several of the fires were burning completely out of control as of October 22.

This image of the fires in California was captured at 1:55 p.m. U.S. Pacific Daylight Time on October 22, 2007. Places where MODIS detected actively burning fires are outlined in red. Thick streamers of smoke unfurl over the Pacific Ocean. The brownish plumes are clouds of dust. Fires northwest of Los Angeles seemed calmer at the time of this image than they were the previous day.

The drought in the Southwest throughout summer 2007 has been “extreme” according to the categories used by the U.S. Drought Monitor. Dry vegetation and Santa Ana winds, which can reach hurricane force as they race downslope from the deserts of the Great Basin and through narrow mountain passes, are often a devastating combination in Southern California. According to the Incident Management Situation Report from the National Interagency Fire Center for October 22, Santa Ana winds were expected to continue through Wednesday.

You can download a 250-meter-resolution KMZ file of the fires suitable for use with Google Earth.