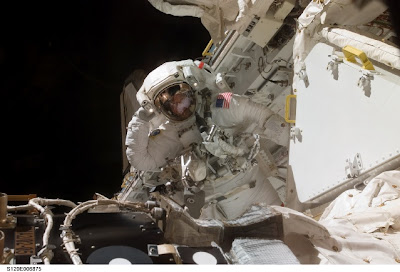 About Photo: (October 26, 2007) Astronaut Scott Parazynski, STS-120 mission specialist, is pictured in the shuttle's cargo bay during the first of five scheduled sessions of extravehicular activity to perform work on the International Space Station while it is visited by the Space Shuttle Discovery. Node 2, also known as Harmony, joined the growing station complex, thanks to the work of the two spacewalkers in conjunction with that of their crewmates who remained in the shirt sleeve environment of the two spacecraft.
Image Credit: NASA TV
*********************
Astronauts are working outside the International Space Station for the second time during the STS-120 mission. The main objective of today’s spacewalk, which began at 5:32 a.m. EDT, is the preparation of the Port 6, or P6, truss segment for its relocation.
.
Parazynski and Tani began the spacewalk heading to the section where the P6 truss was attached to the Z1 truss. Once there they disconnected the umbilicals and bolts holding the two trusses together. Mission Specialists Stephanie Wilson and Doug Wheelock used the station robotic arm to remove the P6. They will place the solar array section in a temporary holding position for tonight before handing it off to the shuttle's robotic arm Monday morning.
.
Tani performed a couple of inspections requested by mission managers. He inspected handrails on a Crew and Equipment Translation Aid cart for sharp edges. While inspecting a rotary joint used to rotate solar arrays he noticed metal shavings and unusual wear on a race ring. The joint has been showing some increased friction lately, and engineers are analyzing potential causes.
.
Parazynski is outfitting the Harmony node with handholds and other equipment. Both spacewalkers will finish up their tasks when they install a new grapple fixture to Harmony. The station’s robotic arm will use the grapple fixture next month when it reinstalls Harmony to the front of the Destiny laboratory.
.
The excursion is scheduled to last 6 hours and 40 minutes. Mission Specialist Paolo Nespoli is the spacewalk coordinator, assisting the spacewalkers with their tasks.
Info from NASA Website.
********
Note: After Sunday’s Spacewalk...
Discovery STS-120 has three more spacewalks scheduled
..
* 3rd Spacewalk Scheduled for Tuesday *
*************
* NOTE: 2nd Spacewalk is now over for the day...
.
2nd Spacewalk began today at 5:32 am EDT
And concluded at 12:05 pm EDT. .
.
* Read the latest updates on Flight/Spacewalks HERE
...
Watch Spacewalks/Mission LIVE
at NASA TELEVISION....
..
Click HERE to find your preferred Video Player
(It’s under... “Watch NASA TV NOW”)
Windows Media Player is best for Full Screen viewing
ENJOY!!!
*******************************************
* STS-120 Interactive Timeline - Click Here *.
************************
..
I’ll be posting on all the spacewalks over the next few days so check back...
GOD SPEED to the Crew of STS-120 DISCOVERY...
AubreyJ.........
Posted by AubreyJ......... at 10/28/2007 01:27:00 AM